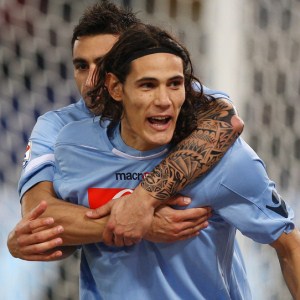 Edinson Cavani took his season goal tally to 20 with a second-half brace in Napoli’s 2-0 Serie A win at Roma.

In a scrappy, niggly game at the Stadio Olimpico, the Uruguay striker netted a controversial penalty on 49 minutes before sealing the win with a flying finish with seven minutes left.

The victory keeps Napoli second, restoring the three-point gap on leaders Milan that was briefly taken to six after the Rossoneri crushed Parma 4-0 earlier on Saturday.

Inconsistent Roma, meanwhile, paid the price for suspensions to defenders Philippe Mexes and Nicolas Burdisso and stay seventh, although they may slip a place if Juventus avoid defeat against Internazionale on Sunday.