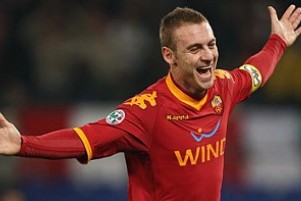 Daniele De Rossi scored the only goal of the game against nine-man Catania on Tuesday night to put Roma into the semi-finals of the Coppa Italia.

Following a goalless opening half at the Stadio Olimpico, the Italy international struck in the 74th minute – two minutes after visiting defender Blazej Augustyn had been sent off for a second booking.

Augustyn joined team-mate Giuseppe Bellusci in the changing rooms, the latter having been given his marching orders shortly before the hour mark.

Catania struggled against a dominant Roma from start to finish but the hosts wasted a hatful of chances until De Rossi came to the rescue.