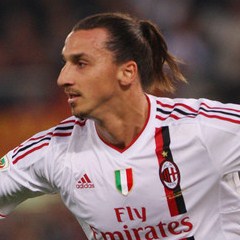 In-form AC Milan inflicted a home defeat on Roma today to move to the top of the Serie A standings – at least for a few hours.

Zlatan Ibrahimovic put the visitors ahead in the 17th minute before Nicolas Burdisso equalised shortly after.

Ibrahimovic gave Milan a two-goal cushion with his second goal of the game in the 78th minute.

Roma substitute Bojan reduced the arrears three minutes from time but Milan held on for their fourth straight league victory.

The result saw Milan go one point clear of Juventus, who were playing at Inter later.

Roma, meanwhile, have gone down to their third loss in four games.