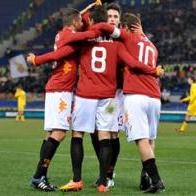 Fiorentina, who beat Roma by the same score in a Serie A match last month when Luis Enrique’s side had three players sent off, had the better of the first half.

However, the hosts went ahead in the 53rd minute when Francesco Totti’s pass set 19-year-old Lamela through to score with a shot between goalkeeper Neto’s legs.