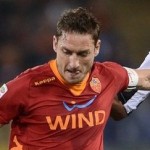 Roma struck twice late in the second half to defeat Udinese tonight and keep their Champions League hopes alive.

Daniel Osvaldo put the home team in front in the eighth minute, but Luis Enrique’s side were pegged back as Gelson Fernandes equalised two minutes before half-time.

Udinese goalkeeper Samir Handanovic produced a wonderful display to repel Roma’s efforts after the restart but could do nothing to keep out Francesco Totti’s close-range effort four minutes from time.

Marquinho made it 3-1 at the death to allow the Giallorossi to climb to fifth place in the Serie A standings – one spot and one point behind Udinese – and close the gap on third-placed city rivals Lazio to four points.