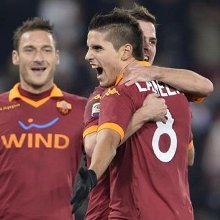 Erik Lamela scored twice as Roma completed a 4-2 win over a poor AC Milan in the final Serie A match of the year at the Stadio Olimpico.

Lamela (30, 61) was joined on the scoresheet by Pablo Osvaldo (23) and Nicolas Burdisso (13) as the home side moved 4-0 ahead against a Milan team toiling to deal with any cross balls into the area.

Substitutes Giampoalo Pazzini (87, pen) and Bojak Krkic (88) made the match sound closer than it was after Marquinhos had been harshly sent off with 13 minutes or so left over his deliberate handball that was deemed to have denied Stephan El Shaarawy a goal-scoring opportunity.

In truth, Milan were awful as they slumped to their first defeat in this fixture since 2008.