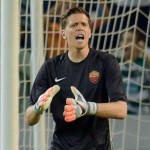 Reports are out claiming that Arsenal goalkeeper Wojciech Szczesny has been dropped by Roma.

However the Serie A club deny Szczesny was dropped because he was caught smoking again, with club director Walter Sabatini claiming the goalkeeper was left out for a match against Atalanta for sporting reasons.

The Polish shot-stopper was left out of Rudi Garcia’s side for a 2-0 home defeat against Atalanta, capping a disastrous week for the Giallorossi.

La Gazetta dello Sport had reported earlier on Monday that Szczesny had been dropped after being caught smoking.

David Moyes Admits Man Utd Could Have Won Against Arsenal