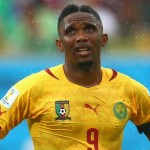 It has been reported that AS Roma are keen to bring Chelsea striker Samuel Eto’o back to Italy.

The Sun reported that the Serie A club are weighing up a surprise swoop for the Cameroon international, who is a free agent after not being offered a new contract by Chelsea at the end of last season.

It is reported that Eto’o also has admirers in China and USA but is determined to have one last crack at the Champions League.