Reports are out claiming that Roma are preparing to make a move for Arsenal defender Mathieu Debuchy during the January transfer window. 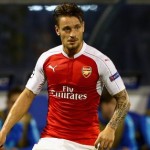 Italian publication Corierre dello Sport is reporting Debuchy is being sounded out by Roma manager Rudi Garcia, whom he played under at Lille.

The 30-year-old has lost his spot as Arsene Wenger’s first choice right-back after a series of injuries saw Hector Bellerin claim the position as his own.

Debuchy is reportedly eager to be playing regular first team football again in order to increase his chances of being selected in the French squad for Euro 2016.