It has been reported that AS Roma are eyeing Chelsea goalkeeper Petr Cech. 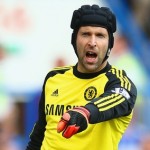 La Repubblica reported that Roma could move for Cech as early as January as they prepare to phase out veteran No1 Morgan de Sanctis.

Cech, who remains second fiddle to Thibaut Courtois, has stressed that he could leave the London club if he does not get more playing time.

But should Cech insist he must move, Mourinho is unlikely to stand in his way given the keeper’s service to Chelsea.