Reports are out claiming that Manchester City have told AS Roma that it will take at least £20million to prize Edin Dzeko away from the Etihad Stadium. 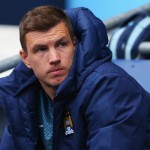 Dzeko has struggled to establish himself as a regular starter under Manuel Pellegrini and despite agreeing a new four-year-deal last August, has been told that he is allowed to leave.

Roma are said to be favourites to land the Bosnian international, but after initially valuing him at £14.1m, have been told by City to raise their valuation for the 29-year old.

However, Roma sporting director, Walter Sabatini will turn his attentions to Anderlecht’s Aleksandar Mitrovic if the Romans are unable to strike a deal with City.