It has been reported that AS Roma’s newest signing Ashley Cole has talked up the possibility of reuniting with former Chelsea striker Samuel Eto’o shortly after their first season together. 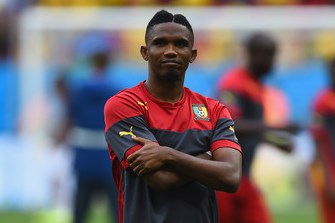 Cole and Eto’o spent last season together at Stamford Bridge, and both players became free agents at the end of the season.

The former Arsenal fullback acknowledged the rumours linking Eto’o to Roma and praised the Cameroon international.

“I’ve heard these rumours and the only thing I can say that we are talking about a great player and a great striker.”

Eto’o scored nine goals in 21 appearances for Chelsea and hit the back of the net more times than fellow strikers Fernando Torres and Demba Ba.

Cole, who controversially joined Chelsea from Arsenal in a bitter transfer feud eight years ago, told reporters he believed Eto’o would improve the team but insisted it wasn’t his decision and it was up to Roma.

“With him the team could improve, but certain decisions are not up to me, but to the person who sits next to me (Italo Zanzi).”

Cole joined Roma off the back of a disappointing season in which he was replaced at left back by Spaniard Cesar Azpilicueta, making only fifteen Premier League starts, and as a result was overlooked by Roy Hodgson for England’s World Cup squad. Arsenal making me look like some kind of idiot! – Szczesny