It has been reported that Ashley Cole has completed a free transfer to Italian club AS Roma. 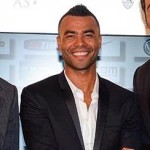 The 33-year old ex-England international left-back has joined the Giallorossi on a two-year deal after coming out of contract at Chelsea earlier in the summer.

Former Arsenal defender underwent a medical on Monday before putting pen to the contract which is expected to land him around £3.65million in wages.

A Roma statement read: “AS Roma have acquired Ashley Cole’s playing registration on a two-year deal which expires on June 30, 2016.

“The agreement also gives the club the right to extend the contract into a further season.”