It has been reported that AS Roma fullback Ashley Cole is surprised seeing former Chelsea teammate Frank Lampard at Manchester City. 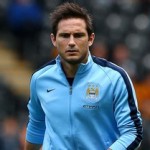 The former Arsenal and Chelsea defender is preparing for Roma’s Champions League tie with Manchester City.

“It’s good to see Joe Hart and Lamps – I never expected to play against him,” said Cole.

“It will be good to see him if we’re both selected.

“I think everyone knows what Lampard brings to every team. It’s another experienced player for City and he brings goals. He scored one against Chelsea. He probably didn’t like that but he’s paid to do a job. It was probably a bit disappointing for him to do that against Chelsea.” I Am Living The Dream – Chelsea Defender Kurt Zouma