It has been reported that Ashley Williams believes Swansea City have the ability to recoil from the weekend’s 4-3 Premier League defeat at Liverpool. 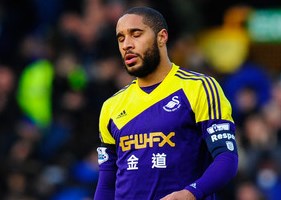 The Swans were exciting but defensively frail at Anfield when conceding on four occasions following an impressive performance in their 0-0 Europa League Round of 32 draw with Napoli at the Liberty Stadium on Thursday.

As the Welsh club prepares for the unenviable trip to Naples this week, skipper Williams suggests there is plenty of scope for improvement following the Reds loss.

The 29 year old told the South Wales Evening Post : “We conceded four goals, which is never nice, but there are a lot of positives to take from it,”.

“We showed character to come back so many times away from home, which I’m not sure too many teams would do.

“Maybe before we wouldn’t have had the belief that we could have come back. Now we do and there were some good performances out there.”

A positive Williams felt that the Swans had it in their locker to go out and score at the Stadio San Paolo which would really put the Partenopei on the back foot.

“We know it’s going to be a different game in Napoli to the one we played the other day and it will be tough for obvious reasons,” he added.

“We didn’t score against Napoli at home, but it wasn’t the fact we didn’t create anything at home, we just couldn’t get the ball in the net for whatever reason.

“We know we can score goals, we’ve been attacking very well now in the last few weeks. We’re getting more players forward now with width and we’re confident.”