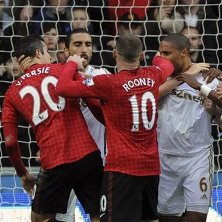 Sir Alex Ferguson has called for Ashley Williams to be banned for a “long, long time” after accusing the Swansea defender of an act that could have “killed” Robin van Persie.

Van Persie was lying on the floor in the second half of Sunday’s 1-1 draw with Swansea City and Williams, apparently attempting to clear the ball, hammered it into the back of the striker’s head after the whistle had gone.

However, Ferguson felt Williams deliberately tried to strike van Persie with the ball and says that his striker could have died as a result.

A melee then ensued, but under Football Association rules Williams cannot be punished for the controversial moment if the yellow card he was shown by referee Michael Oliver was for the kick, rather than for the pushing and shoving that followed.

Ferguson believes the Swansea skipper deserves to be suspended for a lengthy spell as a result of the incident.