It has been reported that Ashley Young is keen to help Man Utd’s new signings settle quickly while on preseason tour. 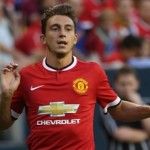 Bastian Schweinsteiger, Memphis Depay, Morgan Schneiderlin and Matteo Darmian have all featured in preseason action in the US.

Young told manutd.com: “The new players are big characters. Matteo [Darmian] is the quiet one out of them but they’ve all fitted in really well. I remember when I first joined – coming on tour and integrating into the squad was great and that’s exactly what they’ve all done and they’ve been welcomed with open arms.

“When you see new signings you’re delighted and you want to help them settle straightaway. It also gives competition for places which you expect at a club like United. Everyone is fighting to be in that starting XI and everyone wants to get back to winning titles and trophies and that’s our aim this season.”