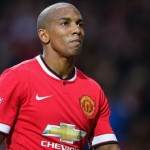 It has been reported that Manchester United winger Ashley Young is desperate to end their derby hoodoo tomorrow against Manchester City.

“I remember the year we beat them 3-2 with Robin’s free-kick right at the end,” Young told Inside United.

“That was a crazy game – we had gone 2-0 up but they got themselves back into it at 2-2. When Robin scored, I think looking back after the goal, the players were running off in different directions.

“I didn’t know where to go and celebrate. You could tell by the joy we had and the way we were celebrating on the pitch with all the staff after the game, it was brilliant and a great feeling. I’d love to have that again.”