It has been reported that Manchester United winger Ashley Young has highlighted the importance of producing a win in the Champions League this week. 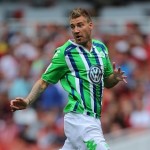 The Red Devils host German club Wolfsburg at Old Trafford on Wednesday night and Young has urged the team to bounce back after losing their Group B opener at PSV Eindhoven a fortnight ago.

“It is important to get a win against Wolfsburg. If you want to win the Champions league then you have to win your home games,” said Young.

“It was a disappointing start to the European campaign especially the possession and chances we had in Eindhoven that really was disappointing.

“We have start winning in the group now.”