Reports are out claiming that Ashley Young has made it clear that any criticism of Manchester United is falling on deaf ears. 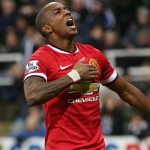 The Red Devils continue to attract negative press despite sitting fourth on the Premier League table but Young says the undesirable words have no ill-effect on he and his teammates.

“People are always going to question the biggest club in the world but we just concentrate on ourselves and don’t listen to anybody else,” Young, who scored an 89th-minute winner in Wednesday night’s 1-0 victory over Newcastle United, told BT Sport.

“We listen to the manager and the staff and we just wanted to come here and get the three points.

“We’ve got a great team spirit and a great bond here and we will fight for our place.

“We knew this was going to be a tough week with the games that have been coming but we’ll take every game as it comes. We’ll celebrate this victory today.”