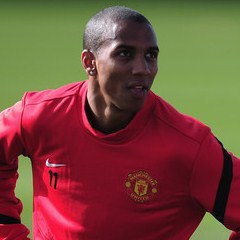 Ashley Young has revealed that all the title pressure is now on Manchester City after victory at Blackburn Rovers.

The Manchester United winger struck in the 2-0 win which sends United five points clear at the top of the table.

The former Aston Villa star told Match of the Day magazine: “I think City are fearing our reaction already.

“A lot of people wrote us off earlier in the season with City being seven points clear.

“But we’ve just been going about our job quietly and now we’ve managed to claw it back.

“The pressure has always been on City — there aren’t any nerves coming from our side.

“We don’t play with fear and we haven’t got any nervousness going into games.

“We’ve got the momentum going into the final stretch of the season.”