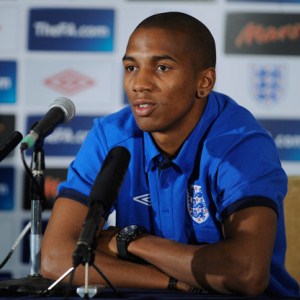 Aston Villa ace Ashley Young has declared that he can’t afford to get nervous ahead of his first competitive start for England.

The Three Lions is set to face Montenegro at Wembley in Euro2012 qualifying on Tuesday with Young likely to be deployed on the left by Fabio Capello.

The winger however has admitted that he is a bit jittery ahead of the encounter.

“The only time I have been was when I made my debut for Watford against Millwall in 2003.

“They had Kevin Muscat in the team and in the warm-up the first thing he said to me was ‘don’t go past me or I will break your legs!’

“I was 18 coming on for my first game so it wasn’t the nicest thing to hear, but you just have to get on with it.

“If you are going to concentrate on your opponent and things he’s saying, he’s just said it to wind me up, if you bite the bait and take that then that’s down to each individual player.

“As it happens, he’d been sent off by the time I came on but the nerves just left me and I concentrated on playing well. I scored as well. I didn’t say anything to him at the end.”