It has been reported that Ashley Young insists he is ready to step up and fight for a starting role at Manchester United. 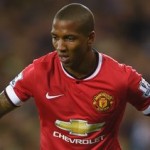 The 29-year old attacking midfielder has fallen right down the pecking order at Old Trafford since arriving from Aston Villa for a whopping fee in excess of £15million in the summer of June 2011.

The England international started his Red Devils career in decent form but is now resigned to a bench role which he says he is determined to change after getting back to fitness from a groin injury.

“I just want to play the best I can. The manager has shown faith in me and I want to go out there and play well,” Young told the Manchester Evening News after Louis van Gaal used him to replace record signing Angel Di Maria on the weekend.

“The injury was a setback. It’s disappointing for any player to get injured but I’m back fit now and I’m only looking ahead. I’m not looking back.

“The new manager has his methods and philosophy and everyone has bought into it. We’ve shown we can go into games and play different formations. We showed that again at West Brom.

“It wasn’t any different for me. It was new things in the role I was playing but, like I said, the manager changed the system and we’re capable of changing the system against different teams.” This Could Be My Best Season – Nani