It has been reported that Stoke City goalkeeper Asmir Begovic has dispelled rumours that he is being pursued by two of Europe’s biggest club. 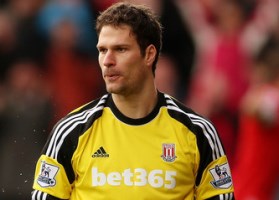 The Bosnian & Herzegovina international has been heavily linked with Spanish giants Real Madrid as well as Manchester United recently but insists that neither club has made contact regarding a potential summer transfer.

Begovic admitted it was humbling to be even mentioned alongside Madrid and United but made it clear that he was happy at the Britannia Stadium.

“There is no truth as far as I’m aware,” he told Sky Sports News. “I’ve had no contact with either club, so from my point of view it’s flattering to hear those kind of words.

“Like I said, [they are] two [of the] biggest clubs in the world and who wouldn’t be flattered if you mentioned them in the same breath as those two kind of clubs?

“I’ve enjoyed my time here and I don’t want that to change, but like I said everyone has ambitions and try to go as far as they can in the game, and it’s flattering to hear the big clubs [linked to you].

“But as far as I’m concerned nothing is concrete, there has been no contact and I just enjoy doing my work each and every day here.”

The 26-year old joined the Potters from Portsmouth in 2010 and has since made close to 130 appearances in all competitions.