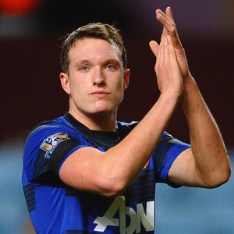 Manchester United clung onto the coat-tails of leaders Manchester City when beating Aston Villa 1-0 in a Premier League match at Villa Park that made for painful viewing.

Long spells of mediocrity, from the home side in particular, were largely punctured by injuries as Javier Hernandez suffered an apparently serious ankle blow and Shay Given was withdrawn with a hamstring problem in the first half, with Jermaine Jenas later joining them on the sidelines.

The only real glimpse of genuine quality in the contest came after 20 minutes when Phil Jones scored his first senior goal with a lovely finish from Nani’s cross. It proved to be the critical moment in an instantly forgettable contest.

The result means United reclaim second place from Tottenham, who earlier won at home to Bolton, and remain five points shy of City. Villa, with just two wins in 13, are eighth but with concerns growing among supporters about the tactical and stylistic approach of manager Alex McLeish.