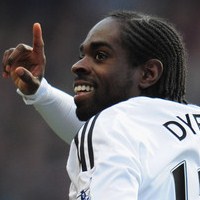 Swansea City took a deserved first away Premier League win of the season as they beat Aston Villa 2-0 at Villa Park.

Nathan Dyer capitalised on a shocking Stephen Warnock error to give the Swans a fifth-minute lead – their fastest goal of the season – and they impressed from that point on.

Wayne Routledge scored his first Premier League goal in his 116th appearance in the division two minutes into the second half to double their advantage, and Villa never looked likely to get back into the game.

Villa won 14 corners to Swansea’s none, but that does not reflect a match which the Welsh side dominated at times – and they defended their goal stoutly when called upon.