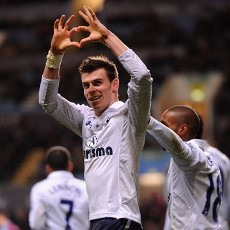 Gareth Bale bagged a second-half hat-trick as Tottenham returned to the Premier League top four with a comfortable 4-0 victory at Aston Villa.

After dominating the first half without managing to make a breakthrough, Spurs went ahead in the 57th minute when Jermain Defoe nutmegged Brad Guzan to register his 14th goal of the season.

Bale – who had already gone close twice – then stole the show, netting in the 61st, 73rd and 84th minutes to take his own tally for the campaign to 10.

The result ensures Tottenham keep up their push for Champions League football, moving them up to fourth in the table, level on points with fifth-placed Everton and sixth-placed West Brom, who had both won earlier in the day. Aston Villa Should Be Scared Of Arsenal – Mesut Ozil