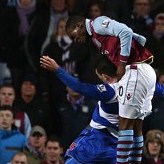 The Belgium international ended a four-game run without a goal when he headed home an Ashley Westwood corner with 10 minutes remaining.

Villa’s third win of the season moved them out of the Premier League bottom three in front of their lowest home league gate – 28,692 – for six years.

The game was not a classic but Villa deserved the three points after enjoying the bulk of possession and looking the more threatening.