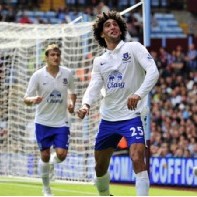 Everton confirmed their early season promise as they cruised to victory at Villa Park – and on this evidence Paul Lambert’s side will face a Barclays Premier League relegation battle.

First half goals from Steven Pienaar, Marouane Fellaini and Nikica Jelavic demonstrated the visitor’s superiority as they followed up their victory over Manchester United in emphatic style.

To add to Villa’s misery, defender Ciaran Clark was sent off after 58 minutes for a professional foul in what was a first home game to forget for former Norwich boss Lambert.