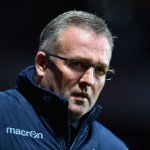 Villa entertain Louis van Gaal’s rejuvenated side tomorrow with Lambert warning his men to treat them as possible champions.

Lambert said: “They might not be able to lose many more games if they are going to win the title but they’re certainly in with a shout.

“It is still a brilliant club with great players.

“The players they have brought in, there’s not many teams in world football who can do that. They’re a really good side.” Ander Herrera Has No Regret Missing Out On Man Utd Move