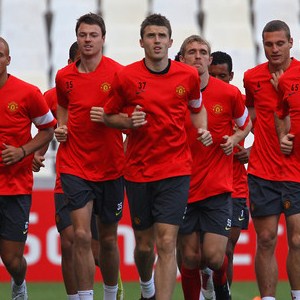 Reports are out that Aston Villa boss Gerard Houllier will not be put off in his bid for Manchester United midfielder Michael Carrick.

The People has revealed that Houllier is determined to sign the England ace – even though the midfielder insists he wants to stay at Old Trafford for life.

It is believed that the former Liverpool manager sees a classy midfielder as a Villa Park priority … and Carrick fits the bill, despite suffering the worst year of his career.

He returned for Manchester United’s 1-0 Champions League win in Valencia on Wednesday, but it was a rare run-out for the 29-year-old, who was once an automatic choice for big games.

But while Houllier is an admirer, ­Carrick – expected to be named in Fabio Capello’s England squad today – has revealed he never believed his time was up at United.

Carrick said: “I have seen some stories suggesting I’d be leaving last summer but I take no notice. It’s part of the game.”