It has been reported that Aston Villa boss Paul Lambert is eager to secure Fabian Delph to a new contract. 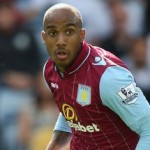 The 24 year old England international made his Three Lions bow as a substitute in last week’s friendly win over Norway at Wembley.

England boss Roy Hodgson then threw him into the starting XI for Monday’s Euro 2016 qualifying win in Switzerland, where Delph excelled in a holding midfield role.

“I didn’t see his first appearance against Norway because I was away watching a game myself,” said the Villa manager. “But I saw his full debut against Switzerland and I thought he grew into the game and was excellent. As the game went on he was great.

“If you perform like that, then hopefully when the next squad is announced he’ll be back in it again.

“He’s been playing well for me for the last few years, so it’s not something that has surprised me. I’ve always said that he wouldn’t let anybody down and I’m delighted for him for the way he played.”

Lambert added: “There a few players who are going to be out of contract, to be honest, and we’ll try to get around to talking to them. I spoke to Fabian early doors and we’ll see how it goes.

“We’ve just got a new chief executive in (Tom Fox) which I’m certain will help.

“I’m pretty sure we’ll sit down with Fabian. I’m not worried. When players get into the last year of their contract, it is what it is.

“It’s not any great issue. Conversations will go on.

“I met Tom the other day, he’s a really good guy and I’m pretty sure things will start to happen pretty soon.”