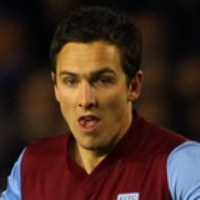 Good news for all Aston Villa fans as the club have opened new contract talks with midfielder Stewart Downing.

The 26 year old England winger is being linked with move to Premier League rivals Liverpool and Sunderland.

However, Villa No2 Gary McAllister said: “Stewart has got two years left and we are getting into that area where it’s coming into our vision.

“It’s in progress at the moment. We are starting to make contact with his agent.

“We have to keep good players here.”

McAllister also went on to say that he would vote for Downing as Villa’s player of the year and believes he is capable of becoming an England regular.

The former Middlesbrough player impressed during the friendly international against Ghana at Wembley in March.

McAllister said: “It’s been a very mixed season but Stewart has been very consistent – especially for a forward player in a team that hasn’t been playing as well as it can.

“He would be my pick as our player of the year. I think him having been injury-free is massive. I don’t think he has missed a day’s training.

“He came here on crutches (signed when had a broken foot). I think he will gain a lot of confidence from this year.

“Getting another pre-season under his belt, he will benefit from that. There’s more to come from him.

“Another wee target for Stewart is that he has always been in and around that England squad.

“The question is can he go and become a part of the team? I feel he has enough in his locker to do that.”