Reports are out claiming that Aston Villa have opened talks with released Arsenal striker Nicklas Bendtner. 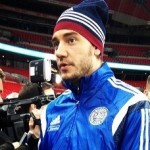 The Daily Mail claims that Villa are in talks over a deal for free agent Bendtner.

The 26-year-old Denmark international has interest from Eintracht Frankfurt but the former Arsenal striker wants to stay in the Premier League.

Villa are bringing players in on a shoestring budget and have made Bendtner an offer but discussions are ongoing as they try to strike an agreement.