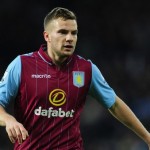 Reports have emerged claiming that Aston Villa boss Tim Sherwood is prepared to lose Tom Cleverley at the end of the season.

The Express & Star reported that Villa won’t stand in the way of Manchester United loanee Cleverley’s wishes to join Everton when his temporary terms expire this summer.

The midfielder is a favourite of Everton boss Roberto Martinez.