Reports are out claiming that Aston Villa are chasing Mainz goalkeeper Loris Karius. 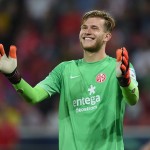 Sport1 reported that Villa are preparing a €10 million-plus offer for Karius, who would arrive to replace USA international Brad Guzan.

His advisor, Florian Goll, stated: “It’s obvious that a goalkeeper of this age and with this consistency in his performance awakens a lot of interest.

“But it’s not just since yesterday that different clubs are striving for Loris and so it’s not a new situation for us.”

Arsenal are also said to be interested in the talented goalkeeper.