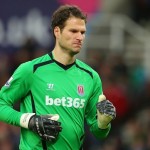 The Birmingham Mail reported that Tim Sherwood is on the lookout for a new goalkeeper this summer but faces competition from Manchester United, Chelsea and Arsenal who have all been linked with the Bosnian.

The Villa boss struggled to choose a consistent number one last season with veteran Shay Given replacing Brad Guzan at the back end of the campaign.

And sources in Stoke suggest Sherwood is determined to sign the 28-year-old – who has one year left on his contract.

Lukas Podolski On The Brink Of Arsenal Comeback