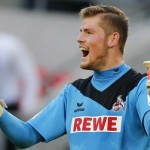 According to the Daily Mail, Aston Villa are interested in signing Cologne goalkeeper Timo Horn.

Villa manager Tim Sherwood is looking to increase competition for current custodians Brad Guzan and Shay Given and has earmarked the German talent as the man to do just that.

According to the report, Villa scouts watched the 22-year old in Cologne’s 2-0 win over Schalke on Sunday and are now ready to make a move for the keeper who has been touted as the eventual successor to Manuel Neuer in the German national team.

Timo Horn ia also linked with a move with Arsenal and Liverpool.