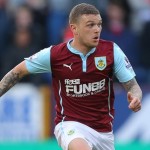 It has been reported that Aston Villa are readying a summer bid for Burnley defender Kieran Trippier.

According to the Daily Mail, Villa are seeking a quality right-back and want 24-year old Trippier who is expected to leave Turf Moor this summer following the Clarets’ relegation from the Premier League.

Tottenham and Liverpool have already been credited with an interest in former Manchester City youth star Trippier but Villa have now entered the race.

Trippier has a £3.5million release clause in his contract which Villa could activate as Tim Sherwood looks to strengthen his squad over the next two months.