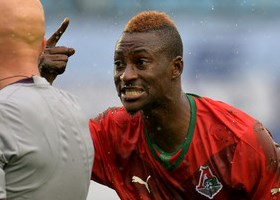 Reports are out claiming that Premier League side Aston Villa are keeping tabs on Lokomotiv Moscow striker Dame N’Doye.

The 28 year old Senegal international is also being followed by Galatasaray ahead of the January market.

“I have heard about interest from Aston Villa, but nothing official yet. My club is reluctant to sell, but everyone has a price,” he said.