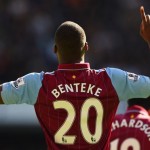 Reports are out claiming that Aston Villa midfielder Ashley Westwood is expecting Christian Benteke to be a handful for Arsenal this weekend.

The Belgium international striker has blasted 11 goals in his past 11 outings suggesting to his teammate that the fear factor is back as Villa prepare for the FA Cup final against the Gunners at Wembley on Saturday.

“I’m sure he does. I think he’s back to full fitness now, he was struggling with his Achilles early on and people didn’t see that, they just expected him to walk back in and fire in the goals,” said Westwood.

“But he’s back to his best now, bullying defenders and I’m sure they’ll have sleepless nights, they won’t want to be playing against him.

“We know how good we are, if we play like we can do we can match anyone. We’ve got internationals throughout the team, Fabs (Fabian Delph) and Clevs (Tom Cleverley) are on form, Christian is a real handful for anyone, I’m sure they’ll be having sleepless nights about him.”