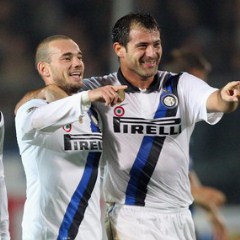 Inter Milan’s Serie A season failed to take off once again as they were held to a 1-1 draw by Atalanta tonight.

Wesley Sneijder put the Nerazzurri ahead in the 32nd minute, but German Denis levelled just before the interval for Stefano Colantuono’s side.

Denis missed a penalty late in the second half as Atalanta almost took all three points at the Stadio Atleti Azzurri d’Italia – but the point keeps them one ahead of Inter, who remain just two points above the relegation zone.