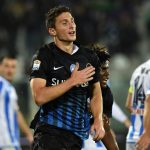 Gazzetta dello Sport reported that Arsenal and Chelsea are both monitoring the situation of young centre-back Caldara.

However, the Premier League duo are set to have to battle it out with Serie A champions Juventus for the Italy U21 international’s signature.

The 22-year-old has a contract at the Stadio Atleti Azzurri d’Italia until the summer of 2021.