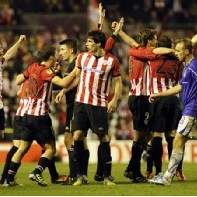 Iker Muniain struck as ten-man Athletic Bilbao claimed a 1-0 win over Lokomotiv Moscow to advance to the last 16 of the Europa League by virtue of the away goals rule.

Lokomotiv were 2-1 winners in the first leg and seemed content to sit on that result in Spain – a mission that seemed to become significantly easier when Fernando Amorebieta was sent off for a second yellow card on the hour mark.

But just two minutes after his departure, Muniain put the hosts ahead from a corner and Lokomotiv were powerless to get a goal of their own despite having the time and the numerical advantage to do so.