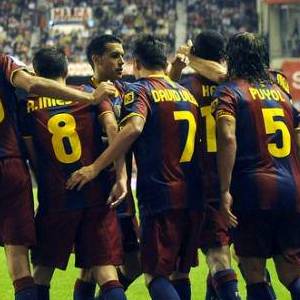 Barcelona were made to work hard in the pouring rain at San Mames but secured a convincing 3-1 victory over Athletic Bilbao to move up to second place in the Primera Division.

The Catalans did not have things all their own way in an even first half but their task was made simpler after Fernando Amorebieta was dismissed for an ugly challenge on Andres Iniesta in the opening period.

Seydou Keita and Xavi both struck after the break to put Catalans in control, and even though Igor Gabilondo gave Athletic hope late on following David Villa’s sending-off, Sergio Busquets clinched victory for the visitors in added time.