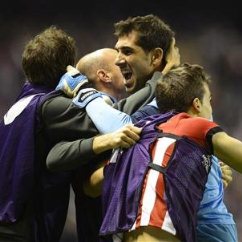 Fernando Llorente’s late winner two minutes from time gave Athletic Bilbao a dramatic 3-1 win over Sporting Lisbon at the San Mames Stadium to send Los Leones through to the Europa League final with a 4-3 aggregate victory.

Markel Susaeta opened the scoring for Athletic Bilbao on the night after 17 minutes before Ricky van Wolfswinkel hit back one minute before half-time.

But Ibai Gomez put the hosts back in front just 60 seconds later to leave the tie level on aggregate at half-time before, with extra-time beckoning, Llorente struck to set up a clash with Liga rivals Atletico Madrid in the final.