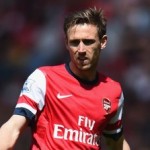 It has been reported that Athletic Bilbao are interested in signing Arsenal fullback Nacho Monreal.

Marca reported that the La Liga side will only move for the 28 year old if Arsene Wenger allows them to have him for a bargain price or on loan.

Monreal signed for the Gunners in January 2013 from Malaga for a fee believed to be around £8m but he has spent most of his time playing second fiddle to Kieran Gibbs.