Reports are out claiming that Athletic Bilbao face a battle to keep Aymeric Laporte away from Premier League clubs. 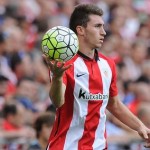 El Mundo Deportivo reported that Bilbao successfully fended off interest in Laporte from a host of clubs this summer, having set the defender’s buy-out clause at £36million (€50m).

The fee was enough to prevent reported suitors Manchester United, Chelsea and Arsenal from plundering the Liga club.

But Bilbao may be unable to stop the player moving in January because of the financial resources available to those three English sides which stem from TV broadcasting rights.

Laporte could be the latest export to leave Spain for England because of the gulf in domestic revenues.

United were touted as keen suitors of 21-year-old Laporte but focused on signing striker Anthony Martial on transfer deadline day.

They paid £36m up front for Monaco 19-year-old Martial – the same value as Laporte.

Bebe : I Will Be Brilliant For Manchester United!