It has been reported that Athletic Bilbao are eyeing Arsenal defender Nacho Monreal. 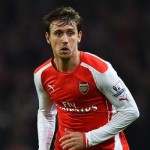 Fichajes.com claims that Bilbao have admired the left-back for some time but Arsene Wenger previously blocked any potential switch.

However Bilbao chief Ernesto Valverde has demanded the club to go and get Monreal in the new year, with a £6.3million fee touted.

Monreal has been forced to deputise in the centre of Arsenal’s defence in recent weeks due to an injury to Laurent Koscielny.

Carl Jenkinson Delighted With The Return Of Alex Oxlade-Chamberlain