Reports are out claiming that Arsenal fullback Nacho Monreal remains a target for Athletic Bilbao. 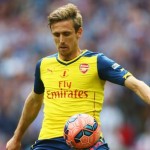 Marca reported that Monreal has emerged as a target for Athletic Bilbao.

The Spanish defender has reportedly set his sights on heading back to his homeland in the near future and Bilbao could offer him a route home.

Monreal has become a mainstay in the Gunners line-up but could still push a move despite having assurances of regular football at the Emirates.